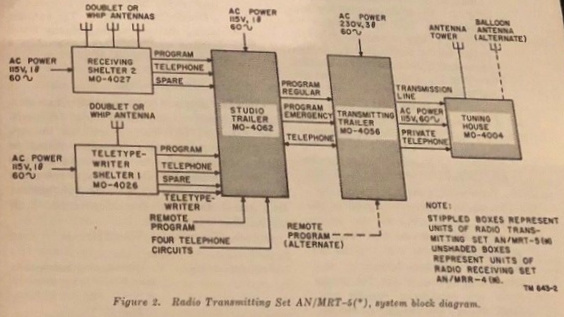 Radio TransmiHing Set AN/MRT-5( ) was a transportable radio station that provided complete radio transmission facilities in the standard am broadcast band. This equipment, when used with Radio Receiving Set AN~MRR-4( ), was a complete radio station for dissemination of information for entertainment and psychological warfare services. All operating components, with the exception of the two power units and the antennas, were housed in the transmitting trailer, the studio trailer, and the antenna tuning shelter. The transmitting trailer supplied facilities for generating, amplifying, and transmitting the rf carrier; and the studio trailer, for all local programming. The antenna tuning shelter provided for tuning the antenna and feeding the modulated rf to the mast antenna or the balloon-carried antenna. Provisions were made for transmitting programs originated at a remote point. Main power for the transmitting trailer and the antenna tuning shelter was furnished by Power Unit PE-85-M; and for the studio trailer, by Power Unit PE-95-G. The AN/MRT-5 and AN/MRT-5A differed somewhat; a variable-frequency oscillator and Radio Receiver R-388~URR were added to the transmtting trailer of the A model.