The radio set provides for operator selection of up to 14 independent preset channels in the 136-to 160-MHz band. A microprocessor and a nonvolatile programmable memory are used to provide the independent preset channels capability. The radio set is also equipped with CODE GUARD Tl circuitry that allows one radio or a group of radios to be selectively called within a system. CODE GUARD TM is a feature used in commercial versions of the radio set. The CODE GUARD T" function is present in the R/T produced for the Army. Because CODE GUARD TM is not considered an operational requirement, it is not covered by warranty. The programming instructions in this manual disable the CODE GUARD feature so that it will not interfere with normal operation 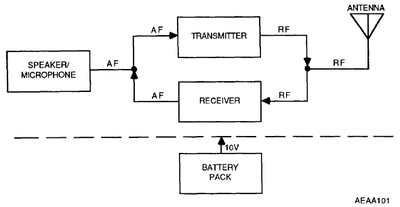 When the radio set is turned on, the unit is in the receive mode. Radio frequency (RF) signals entering the antenna are converted from RF to intermediate frequency (IF), amplified, and demodulated to audio frequency (AF). The AF output is filtered and amplified and routed to either the internal or external speaker/microphone.

The radio set is placed in the transmit mode when the push-to-talk control on the R/T is pressed. The internal or external speaker/microphone is used to apply a voice signal to the transmitter. The AF signal is amplified and used to frequency modulate an RF signal. The modulated RF signal is then further amplified to provide an RF output signal (2 watts, nominal) to the antenna for radiation.

The transmitter is equipped with a timeout timer to limit the duration of calls and to guard against locking in the transmit mode and tying up the radio net. The timeout timer inhibits the transmitter after the selected time has elapsed. Timeout time is selected (0 to 225 seconds) using the keyboard. Setting the timeout time to 0 second disables the timer so that the user may talk as long as he wishes. Use of the timeout timer is not considered an operational requirement and is not covered by warranty, except that when it is disabled in accordance with the instructions contained in this manual, it must not interfere with the normal operation of the radio set.