Either the RT-1523/A/B/C/D or the RT-1523E comprise the core component of all ground-based radio sets. The RT-1523 series has internal COMSEC circuits (source of the ICOM designation). The ground versions are equipped with a whisper mode for noise restriction during patrolling or while in defensive positions. The RTO whispers into the handset and is heard at the receiver in a normal voice.

These radios support internal COMSEC cards. The COMSEC cards are considered to be Controlled Cryptographic Equipment (CCI), and are not allowed to be in civilian hands. Below is an image detailing where the COMSEC card would be installed:

"Unlettered" RT-1523 radios (i.e., plain RT-1523 instead of RT-1523A, RT-1523B, etc.) will function normally in plaintext mode with the COMSEC card removed, and such radios have been available on the surplus market. They will also function normally in single channel mode (i.e., non-frequency-hopping) with the ECCM card removed. However, possession of the ECCM card does not appear to be restricted at this time.

It is reported that the RT-1523A will not function normally with the COMSEC card removed. 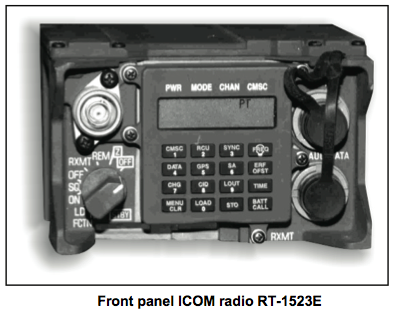 The SINCGARS ASIP increases the performance of the SINCGARS SIP (RT-1523 C/D models). It also increases its operational capability in support of the tactical Internet, specifically improved data capability, manpower and personnel integration requirement compliance, and flexibility in terms of interfaces with other systems. 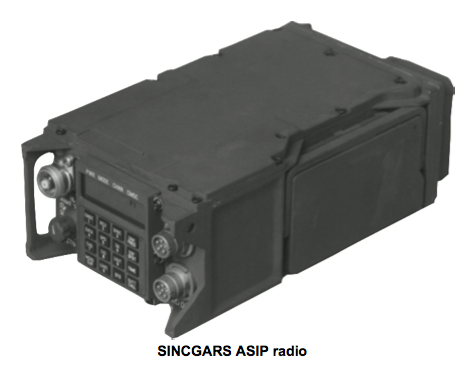 All ASIP radios can be physically remoted by another ASIP radio up to 4 km (2.4 miles) away, via a two-wire twisted pair (typically WD-1 or WF-16). To remote a radio, an external two-wire adapter is used as the interface between the radio and the wires. This remote control feature can be performed between the dismounted RT and the VAA, or between two dismounted RTs. Another host controller can control the ASIP radio via the external control interface when the ASIP radio system is integrated as part of a larger system.

The SINCGARS ASIP radio incorporates an ESIP waveform. The waveform includes optimizations to the algorithms of the noisy channel avoidance scheme, the time of day tracking scheme, and the end of message scheme. Enhancements include