The TA-312/PT and the TA-43/PT are two-wire, battery-operated field telephones. They may be used in a point-to-point wire system or in any two-wire ring-down subscriber position of a telephone communications system. The Handset H-60 contains a push-to-talk switch which connects power for talking. The TA-312/PT has a built-in Receptacle Connector U-79/U for use with a headset and an associated EXT-INT switch; the TA-43/PT does not. The TA-43/PT was replaced by the TA-312/PT. The TA-955/PT dual tone multi frequency (DTMF) adapter allows push button operational interface with automatic analog switches and regular civilian type phone systems. 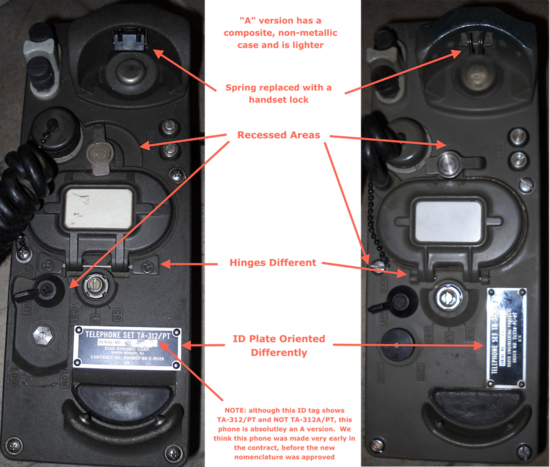 Local battery operation, power is from the local installed batteries

Common battery signaling (local battery for voice), power from switch board, but the installed batteries are used for voice. this is useful if the sound quality is low due to long distance from the switchboard.

If no battery supply is available, it is possible to transmit for approximately 4 miles by using the receiver (ear speaker, not the microphone) element as a sound-powered transmitter element.

http://www.signalcenter.com
Excellent Service and Lots of new parts for the TA-312 (2013)